Why You Shouldn’t Use Filter Words (he thought)

Anyone who works with me will learn that I despise what are commonly known as “filter words.”

All filter words do is create distance between the reader and the action.

Filter words such as—He thought he saw or She realized that—are essentially verbs that filter the reader’s experience of the plot through the eyes of the main character.

For example, let’s look at the following sentence.

Ray-Ray realized his boss had just slapped him across the face. 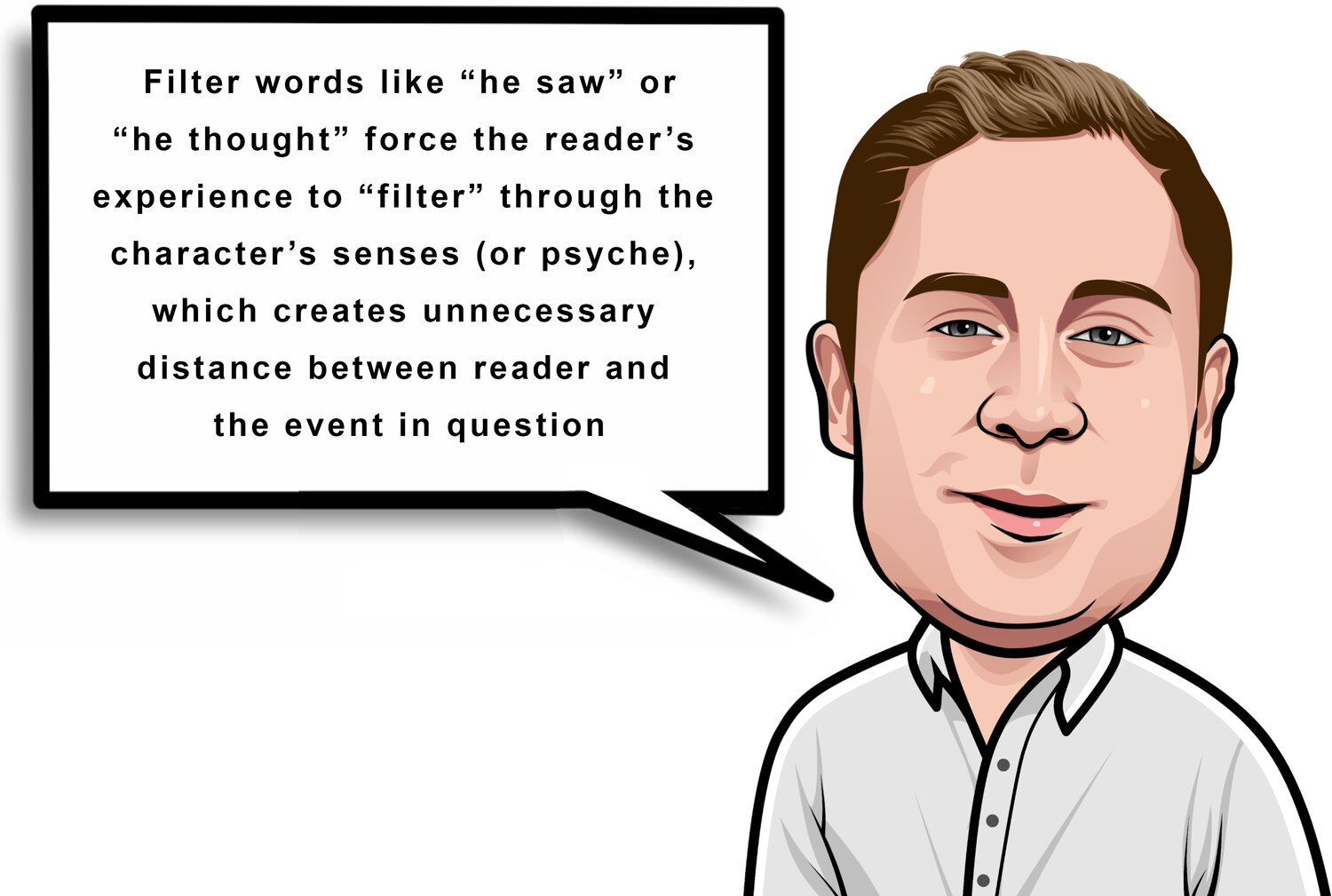 Instead of the reader experiencing firsthand what happened, you’re actually making the main character experience it, only to then filter it back to the reader.

We experience Ray-Ray’s painful revelation first, then the slap, which already happened but is described next.

Why would an author do this?

I used to do it all the time in my writing, but I’ve since cut back dramatically—and my writing has improved as a result.

The correct sentence would be:

Ray-Ray’s boss slapped him across the face.

The problem with the first sentence is that filter words create distance between the narrator and the character/action, which makes the sentence read more like a detached, stuffy narrative an old person wrote while in their leather armchair rather than an experience lived in the moment, which is how scenes should feel to your readers.

Which paragraph below sounds more immediate and vivid?

He realized the door was locked, which he assumed meant he was trapped, a prisoner in this decrepit basement. Today seemed like the worst day to be drugged and kidnapped, as he remembered the most important board meeting of his life was in three hours. Maybe, he thought, that’s why he was down here. Suddenly he knew someone wanted to stop the trade.

The door was locked. He was trapped, a prisoner in this decrepit basement. In three hours, he was supposed to attend the most important board meeting of his life. Instead, he’d been kidnapped, drugged, and left to rot down here.

Maybe someone wanted to stop the trade from happening.

Did you pick #2 as the more vivid paragraph?

Is it the one that lets you live these thoughts and realizations in the moment?

The paragraph that is—bonus point!—much shorter and easier to work with?

I would have chosen #2 a million times over. It’s easy to see why. We know this character had a whole bunch of revelations about being trapped in the basement. So don’t tell us “he thought” or “he realized”. Instead, show us what those revelations were.

By removing the filter words and phrases from #1—He realized, he assumed, Today seemed, he remembered, he thought, and He suddenly knew—you’re making the action more immediate, so it hits your reader right in the face.

And smacking your readers in the face (with words) is a good thing, trust me.